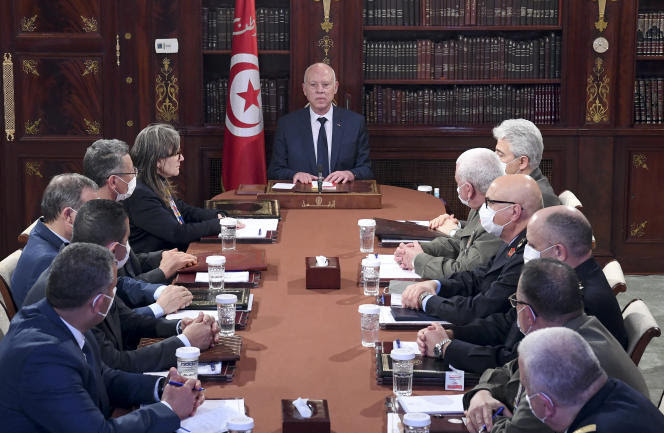 In Tunisia, President Kais Saied's consolidation of power and embrace of autocratic measures threaten the lone remaining success story of the Arab Spring. The Biden Administration should move from rhetorical support for democracy in Tunisia to the use of American financial assistance to press for reforms, and should not support Tunisia’s requested IMF loan unless they are forthcoming.

Tunisia is seeking a $4 billion loan from the International Monetary Fund (IMF). After his June visit there Jihad Azour, IMF director for the Middle East, said that “the IMF stands by the side of the Tunisian authorities in their efforts to advance economic and social reforms for the benefit of the population.”

But are “Tunisian authorities” furthering reforms that would benefit its population? Or more accurately, would the IMF loan shore up a deepening dictatorship?

On July 25, 2021, Tunisian President Kais Saied won his referendum to adopt a new constitution that dramatically increased his executive powers, undermined checks and balances, and put paid to Tunisia’s democracy. The plebiscite attracted notably low turnout: according to official figures, 70 percent of the voting public boycotted the vote or decided not to participate.

The referendum capped a year of democratic backsliding and power consolidation by Saied, a former professor elected president in 2019. From the moment he parked tanks in front of parliament on the evening of July 25, 2021, Saied has followed an autocrat’s playbook to the letter:

The consolidation of power in Tunisia is reminiscent of Nicolás Maduro’s Venezuela, Daniel Ortega’s Nicaragua, and dozens of other creeping dictatorships over the decades. Saied’s new constitution simply allows him to rule as he sees fit: he holds all executive and legislative power.

As expected, the vast majority (96 percent) of those who participated in the July 25th referendum voted in favor of Saied’s plan to replace the 2014 constitution. The process under which the vote took place was improvisational, nontransparent, non-inclusive and—according to some nongovernmental organizations and political parties—fraught with deficiencies and malfeasance. Opposition figures and outside observers have serious doubts about whether even 30 percent of the public came to vote, as most of the country’s voting sites lacked observers. In Tunis, many observers noted empty voting stations for most of the day.

How the low turnout affects Saied’s calculus moving forward is still uncertain. Opposition political parties fear they are next; Saied could ban certain parties from participating in the December 2022 parliamentary elections, potentially eliminating Tunisia’s free political party system altogether. If he does so, he will have truly turned back the clock to when former dictator Ben Ali was in power before the 2011 democratic revolution led to his ousting.

The U.S. reaction to the referendum came in a July 28, 2022, statement by Secretary of State Antony Blinken, who noted that under Saied, “Tunisia has experienced an alarming erosion of democratic norms over the past year and reversed many of the Tunisian people’s hard-won gains since 2011. Since July 25, 2021, the suspension of constitutional governance, consolidation of executive power, and weakening of independent institutions have raised deep questions about Tunisia’s democratic path, both in Tunisia and internationally.”

Blinken added that “An inclusive and transparent reform process is crucial going forward” and said the United States urges “the swift adoption of an inclusive electoral law that facilitates the broadest possible participation in legislative elections planned for December, including among those who opposed or boycotted the constitutional referendum.”

Why should Saied comply and step back from the path to a consolidated dictatorship? His regime’s immediate reaction to Blinken was to accuse the U.S. of “interventionism.”

Secretary Blinken said “the United States has and will continue to use all tools at our disposal to support the Tunisian people.” It should. Only last December the Joe Biden Administration laid out its vision of global democracy at the Democracy Summit it convened. And last October, President Biden said

“As we look around the world today, we see human rights and democratic principles increasingly under assault. . . . We have fewer democracies in the world today than we did 15 years ago. Fewer. Not more—fewer. . . . That’s why, from day one of my administration, I’ve taken concrete steps to put human rights back at the center of our foreign policy and reassert our moral leadership on the global stage.”

The fact that the sole success story of the Arab Spring appears to be slipping back into autocracy is a major blow to proponents of democracy. Autocracies like China, Iran, and Russia will welcome the collapse of Tunisia’s democratic aspirations as more “evidence” of the failures of democracy as a system.

So what should the Biden administration do? Since the January 2011 democratic revolution, the United States has committed more than $1.4 billion to Tunisia. Today the Millennium Challenge Corporation (MCC) has a pending $500 million compact with Tunisia. In 2019, when Tunisia was still a democracy, the United States and Tunisia signed a five-year “Development Objective Agreement” for the U.S. Agency for International Development (USAID) to provide up to $335 million to support “increased private sector employment and democratic consolidation.” Because MCC requires recipients to maintain democratic standards, and because the provision of USAID funds for “democratic consolidation” would be a sad joke in Tunisia today, all these funds should be suspended.

Perhaps more important, the United States should oppose the impending $4 billion IMF loan to Tunisia until that country gets back on a path toward democracy. Saied badly needs the loan, so the United States should use it to bargain for political concessions. As the head of the IMF’s recent mission in Tunisia said, “Broad buy-in will be essential” for any IMF-supported economic program to work—buy in Saied does not have. To take the most potent example, the powerful UGTT labor confederation said in June that "We reject the conditions set by the IMF. . . . We support reforms, but we don't share the vision of reforms supported by this government.”

The United States and other donors have considerable leverage. Now is the time to use it, to protect what political space is left in Tunisia and prevent the final consolidation of a one-man dictatorship. The risks of supporting democracy in Tunisia are low, and the rewards—for Tunisians and for American global support for democracy—would be substantial.

This publication is part of the Diamonstein-Spielvogel Project on the Future of Democracy.

Elliott Abrams is senior fellow for Middle Eastern studies at the Council on Foreign Relations (CFR) in Washington, DC.
Link to Article
News