Report: Supporting Tunisia: A priority for the Trump Administration? 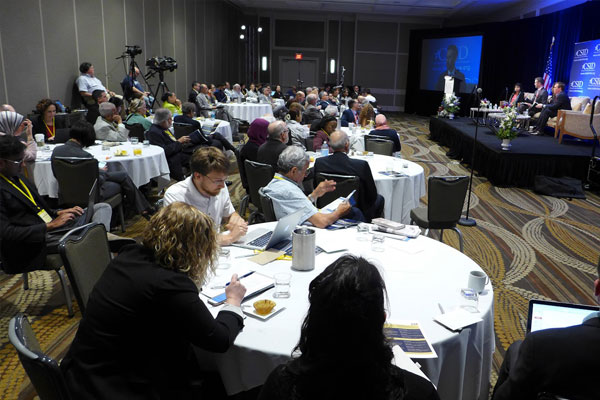 As Tunisia’s transition to democracy continues to move forward, in spite of the challenges it faces particularly with regards to its struggling economy, the country is looking to its friends and allies around the world for support now more than ever. In order to highlight the success of the Tunisian democratic transition within Washington policy circles, the Center for the Study of Islam and Democracy (CSID) organized a luncheon panel at the Washington Marriott Metro Center Hotel on Thursday, November 17, 2016. With over 120 of Washington’s most influential political and civil society leaders in attendance, this event was a meeting of policymakers who are committed to advancing partnerships and collaborations between the Tunisian and American people.

Dr. Radwan Masmoudi, President of CSID, opened the panel discussion by citing a poll by Public Religion Research Institute (PRRI) that revealed that 56% of Americans believe that Islamic values are incompatible with American values, with a staggering 76% figure among registered Republicans. As shocking a statistic as this is, it reflects precisely the terrain which CSID was designed to target as its mission is to demonstrate not only that Islamic and democratic values are not mutually exclusive, but that in many ways they go hand in hand. Tunisia, explained Dr. Masmoudi, is the proof that we need to show that this is not theory, but can and will become a reality. It is therefore a deep belief of CSID’s that Tunisia’s transition to democracy be supported morally, technically and financially, and it is the goal of this luncheon event to make it plainly clear that this ought to be a top priority of the incoming U.S. administration.

Ambassador Faycal Gouia, Ambassador of Tunisia to the United States, was the first speaker of the day, and opened his remarks by talking about ways in which to further develop the Tunisian-American relationship, which he insisted would be and must be a priority of the incoming administration. Ambassador Gouia pointed to the strategic partnership between the two countries in terms of security and military cooperation as well as trade and investment. Combatting terrorism and extremism is no doubt a serious preoccupation of the United States moving forward, and “Tunisia is serious about fighting terrorism” as well, he insisted. The Ambassador explained that it is because democracy is “the antithesis of the terrorist [project]” that extremist groups have been targeting the country, trying to derail the democratic process so that it cannot serve as a model for the region.

“Terrorism and democracy are not compatible.. and this is a common ground between Tunisia and the United States,” the Ambassador said, who argued that it is in the direct and immediate interests of the incoming Trump administration to offer support and strengthen cooperative initiatives with Tunisia. But cooperation should not remain solely at the level of security but must delve deeper into finding ways to make democracy work for the people. Ambassador Gouia pointed to studies that have shown that the average Tunisian citizen is becoming disenchanted with the democratic process, which has been slow to deliver jobs, development, and economic growth. Finally, Ambassador Gouia noted that as Tunisia is a relatively small country with a small market, it would not require enormous funds to deliver sizable results and make all the difference for ensuring the success of Tunisia’s democratic transition.

Mr. Gregory LoGefro, Acting Deputy Assistant Secretary of State for Maghreb Affairs, emphasized that Tunisia is “of increasing strategic interest to the United States” and that while he cannot speak for the incoming administration, he is confident that the U.S.-Tunisian strategic relationship will continue to grow based on Tunisia’s stand for the advancement of democracy. Speaking about the security threats that the country has confronted since 2011, LoGefro pointed to the obvious improvement in the professionalism of Tunisian military and security forces in resisting and undermining terrorist efforts, a fact most evident in the events of Ben Guerdane in March 2016.

As Tunisia moves towards greater internal stability and security, he explained, the United States is interested in expanding its support to other critical areas, like the court system, to ensure the rule of law. Additionally, with “over 30 years of economic mismanagement under the old regime,” LeGofro explained that the United States is also committed to supporting Tunisia as it modernizes its economic policies, promotes entrepreneurship and explores opportunities to attract investment. All of these various avenues for deepening U.S.-Tunisian bilateral engagement are directly linked to the great importance and shared goals of the two countries, and demonstrate that the United States is indeed committed to Tunisia’s success.

Ambassador William Taylor, Vice President of the United States Institute of Peace (USIP), who had just returned from a trip to Tunisia, shared that the U.S. Institute of Peace is in the process of opening an office in Tunisia out of its firm belief in the promise that the Tunisian burgeoning democracy holds: “we are committed as an Institute to this country that lives peace in a difficult world.” Looking around to almost every other country in the region, it is self-evident that Tunisia represents a glimmer of hope for all, and has a vibrancy and engagement in its political and civil society that must be encouraged and continue to be supported.

Giving an example of the kind of innovative entrepreneurial spirit that is driving Tunisia forward, Ambassador Taylor spoke about a recent IT conference put together in the interior of the country by around 1,000 young Tunisians which put pressure on the government to find ways to make it easier for IT equipment and materials to be purchased from abroad so that start-ups and small companies can flourish throughout the country. It is this spirit that demonstrates how valuable Tunisia is as a partner and an ally to the United States and countries around the world, and the Ambassador expressed confidence that cooperation between the two countries would only improve under the next administration.

After hearing from the three speakers, all influential figures in Washington policy circles, the floor was opened for questions and comments from the audience, which included representatives of the current and incoming administrations, influential policy makers, and renowned academics and activists. It was a very lively and engaging debate which centered around some of the uncertainties regarding the foreign policy initiatives of the Trump administration as well as reinforcing the urgency of shoring up the Tunisian economy so that its democracy is not derailed from its path to stability and democratic consolidation.

The Center for the Study of Islam and Democracy (CSID) showed unparalleled initiative in organizing this timely event, and is extremely optimistic in the future of U.S.-Tunisia relations promoted in large part by the strong constituency of partners and allies to Tunisia in Washington D.C. Coupled with the overwhelming success of the International Investment Conference Tunisia 2020 that shortly followed this event, Tunisia’s better days no doubt remain ahead of her.