Illiberal Intelligentsia and the Future of Democracy in Egypt 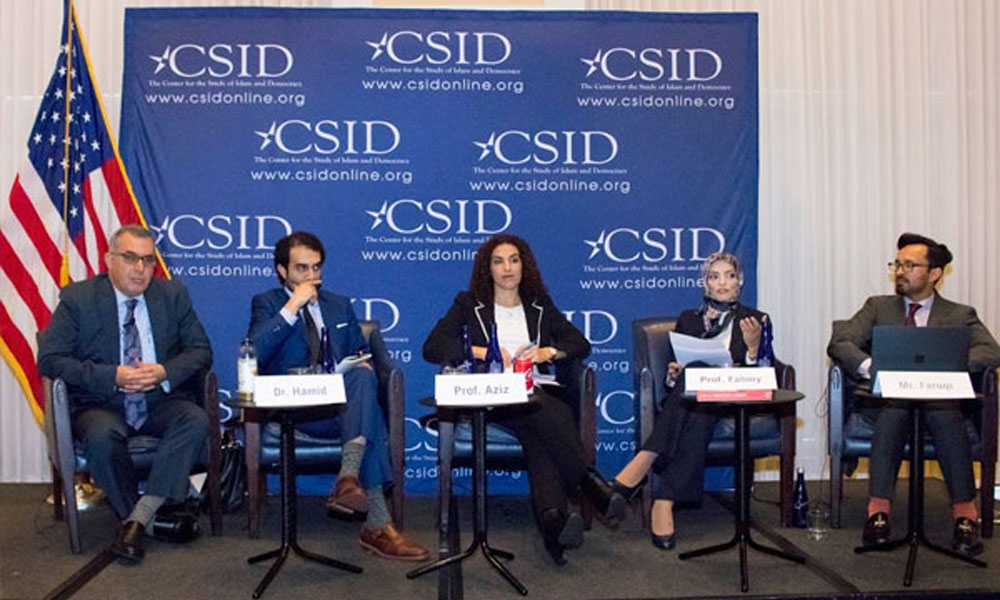 The Center for the Study of Islam and Democracy (CSID) hosted a panel titled “Illiberal Intelligentsia and the Future of Democracy in Egypt”, on January 9, 2018 at the National Press Club in Washington DC.

CSID President Dr. Radwan Masmoudi opened the session by noting that on the seventh anniversary of the Arab spring, four countries have been going through particularly difficult times: Syria, Yemen, Libya, and Egypt. He said that the Arab spring experience and its aftermath have provided two key lessons. First, “dictatorships are not stable” and can fall quickly when millions of people take to the streets, nor are they conducive to development. The main cause of violence and extremism in much of the world is the lack of hope—lack of opportunities, lack of freedom, lack of democracy, lack of dignity—that young people face, and the situation will remain fragile and unstable as long as these aspirations are not addressed. The second lesson of the Arab spring is that “democracy must be inclusive.”

“Political parties need to put aside differences and work together to build new systems of government and a new democratic order built on compromise, respect, inclusivity and peace.”

Daanish Faruqi, a Visiting Scholar at Rutgers University and co-author of Egypt and the Contradictions of Liberalism: Illiberal Intelligentsia and the Future of Egyptian Democracy, opened the panel looking at the ideological foundations of Egypt’s intellectual illiberalism. Initially, intellectuals had resisted the Mubarak regime and supported the 2011 revolution, standing up for liberal rule of law. However, in 2013 these same intellectuals backtracked, acquiescing in the face of the massacre of some 1000 Muslim Brotherhood-linked civilians in Cairo’s Rab’aa square in August and of the regime’s severe crackdown on civil society. Intellectuals that had once argued that Islamists could be “domesticated” by inclusion in the political process had now declared “open season” on those very same Islamists.

Egyptian liberalism was molded in a European crucible, combining Europe’s liberal political philosophy with writings on race and Orientalism to yield an “obstinately secular” political project that made little sense to Egyptians “for whom religious metaphysics remained a guiding force of daily life.” Seeing Egyptians as “too backward and irrational” to be proper citizens, early liberals embraced “statism,” which Faruqi defined as an interventionist state cultivating liberal citizens. This approach created a conflict between a political philosophy predicated on individual autonomy and curbing state power and a project “wedded to a deeply powerful central state.”

This contradiction, he argued, helped make Nasserism possible, in which a “temporary” reformist “tyrant” would overcome parliament’s inability to effect change and implement modern reforms while forcibly “creating” modern citizens, before “benevolently” stepping aside. The contradiction also made liberals who were “diametrically” opposed to Islamism strange bedfellows with their arch-enemies in that both sides were “deeply wedded to an ideological statism.” Analysis of writings by al-Banna and Qutb reveal that the Egyptian Muslim Brotherhood was beset by parallel contradictions, relying on a “powerful central state to forcibly create the conditions of a proper Islamic society.” Faruqi concluded that these contradictions suggest that both “liberals” and Islamists need to revisit the origins of their political projects and their ultimate aims if they are to have any long-term viability. Central to this task is connecting political project to Egypt’s own social, cultural, and religious context.

Dr. Dalia Fahmy, an Associate Professor of Political Science at Long Island University, author ofInternational Relations in a Changing World and co-author of Egypt and the Contradictions of Liberalism, lamented the silence of Egyptian elites and the intelligentsia as nondemocratic forces steadily consolidated power after 2011. After the 2013 Rab’aa massacre, a frightening and new exclusionary discourse emerged asserting that “undesirables” needed to be “eliminated to cleanse the Egyptian nation.” Fahmy focused on institutional and structural dimensions of Egyptian illiberalism. She argued that weak institutions in Egypt have hampered democratic consolidation. Central to this is the manner in which the parliament itself functions to weaken political parties, and dysfunctional parties promote the illiberal political order “enshrined and perpetuated at a systemic level.”

By 2016, the Sisi administration had effectively “neutered” the parliament by “constitutional fiat,” including the right of the President to declare a state of emergency with no parliamentary participation and the stripping of parliament’s review of key ministerial appointments or budgets, such as those of defense, interior, and justice. The 2014 constitution eliminated the upper house of parliament, mandating that 75% of parliamentary seats be reserved to candidates without party affiliation, limiting parliamentary seats assigned to parties to 20%–thereby marginalizing small parties, and appointing 5% of parliament himself, with the right to dissolve the parliament if it rejected his candidates. Sisi also called for the creation of a unified electoral list for the 20% of parliament associated with party lists. The “For Love of Egypt” coalition, while denying any ties to Sisi or state security, went on to win all 120 seats in the elections, which allowed Sisi to usurp full legislative powers along with his expansive executive powers. For the Love of Egypt is comprised of the very illiberal forces that “purported to offer a liberal alternative to both Mubarak-era politics on the one hand and the brotherhood on the other.” Now with 60,000 citizens in prison as a result of the crackdown, Egypt has now returned to state oppression with the complicity of much of its intelligentsia.

Rutgers University Professor of Law Sahar Azizlamented the ease with which the “deep state” of security institutions has maintained its grip on power despite “the desire of Egyptians to self-govern.” She noted that civil society and political parties and leaders were “woefully unprepared” to compete in the post-January 2011 political environment as a direct result of decades of political control. To address these issues, first, Egypt should “create a political environment” that permits dissent and professionalize its politics and civil society. It should change its approach to the non-profit sector from one of disdain and distrust to one that sees NGOs as resource for research, education, and debate. Parties and politicians should serve as a check on government and on each other to decrease corruption, fraud and misinformation. Aziz rejected the familiar claim that Egyptians are not ready for democracy, arguing that the post-2011 political chaos was due to inexperience and sabotage, but that with a free press and free institutions, Egyptians could self-govern.

Second, she called on Egypt to double its investment in education and in youth. She noted the remarkable success of Egyptians in the United States when given access to quality education and employment opportunities, who include figures such as Ahmed Zewail, Mohamed Baradei, Dina Powell, Ayman Mohyeldin, and Mohamed El-Arian along with hundreds of thousands of professionals. Third, she emphasized the importance of an independent judiciary in preserving the rule of law. This would include fairer trials, limits on arbitrariness of government action, and increased rights and freedoms. “Mass death sentences, military trials of civilians, and criminalizing youth dissidents do not comport with rule of law.” She noted that an increasing number of judges are graduates of the police academy, trained to privilege security imperatives and to obey orders.

Dr. Shadi Hamid, a Brookings Institution Senior Fellow, contributing editor at The Atlantic, and author of Islamic Exceptionalism, Rethinking Political Islam, and Temptations of Power, began with a plug for the Fahmy-Faruqi book, which raises the important tension between liberalism and democracy. Being a democrat, he argued, is a difficult, “learned skill.” While Americans use the term “democracy” as shorthand for “liberal democracy,” comments he has heard in the last year about forcibly removing Trump from office by impeachment, or “constitutional coup,” have troubled him. Like Egyptians, Americans are also having to deal with the prickly issue of what happens if an illiberal democrat is elected.

Hamid defined liberalism as a set of “non-negotiable rights and freedoms with an emphasis on individual autonomy.” Democracy is more about “reflecting the popular will,” usually though majorities; “citizens vote for representatives and representatives are responsible for policy-making.” Citizens may vote for illiberal ethnonationalists, white nationalists or Islamists. The Muslim brotherhood has committed itself to democratic politics but does not believe in the tradition of Western liberalism. Illiberal democrats are a global phenomenon that includes Hindu nationalists, Israelis vis a vis second class Arab citizens, the Phillipines’ Dutarte or Hungary’s Orban. He argued that from a liberal perspective it is understandable why Egyptian liberals did what they did in 2013, drawing a comparison to 18th and 19thcentury European liberals suspicious of “mass politics” and supporting post-1848 counter-revolutions. In Egypt, with Islamists of various stripes winning 70% of the seats in parliament, and because liberalism had no “inherent constituency,” support for illiberal outcomes is logical. Hamid expressed skepticism most Arab liberals would become true democrats willing to accept the electoral results without liberal outcomes. He concluded by advocating that Egypt and other Arab countries move away from state-centric approaches.

Highlights of an hour of questions and answersincluded Dr. Masmoudi lauding the Tunisian system’s move towards a parliamentary system with better distributed power and an electoral system limiting the role of large parties. Aziz and one audience member from American University in Cairo argued that in 2013 many liberals simply feared for their lives or livelihoods or, alternatively, went to jail in large numbers, including many less prominent figures. In both cases, neither silence nor incarceration were clear evidence of complicity or illiberal thinking. Other liberals sincerely believed that Morsi did not intend to respect democratic rules and that military would deliver democracy.

Nonetheless, most young Egyptians did not support Sisi for president in 2014, not even Tamarod. Hamid and Faruqi countered that speaking out before the Rab’aa massacre was possible “when the risks appeared low”; many liberals deluded themselves in thinking that the military would be respectful of rights; and young people all too often express either radical or illiberal views. Fahmy reminded everyone that the regime had assisted the development of the illiberal intelligentsia by crushing viable secular opposition. Aziz criticized the elitism of Egyptian politicians unwilling to engage in retail, grassroots politics and the independent judiciary façade that Egypt erects to exact international assistance “rents” and to provide political cover to donors. The entire panel criticized the U.S. tendency to privilege short term geopolitical imperatives over long-term strategic support for stability through reform. Americans, including the Egyptian-American diaspora, need to better advocate for long term stability built on democratic reforms rather than short term stability built on repression.