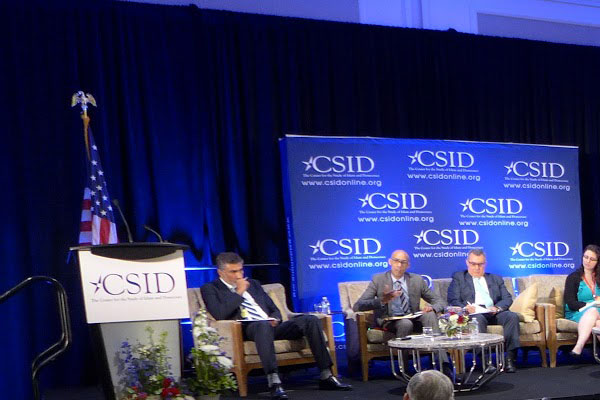 CENTER FOR THE STUDY OF ISLAM AND DEMOCRACY

These are dark days for democracy in Muslim-majority societies. Almost everywhere, despotic and authoritarian governments are firmly in control while democratic movements and civil societies are repressed. These authoritarian regimes are primarily in conflict with their own societies, but also with each other. The rivalry between the Islamic Republic of Iran (and its allies) versus the Kingdom of Saudi Arabia (and its allies) stands out. This has fueled sectarian conflict across the Islamic world, producing greater instability and new levels of violence.

The policies of the Trump Administration have exacerbated these trends. The embrace of autocratic regimes continues a long pattern of Western policy toward the Arab-Islamic world that mistakenly seeks stability in political authoritarianism instead of representative democracy. The primary beneficiaries of this state of affairs are radical extremist groups who, amid this chaos, are able to gain new recruits. The prognosis for the future looks grim.

The nineteenth annual conference of the Center for the Study of Islam and Democracy (CSID) will, therefore, be devoted to exploring the complexities of this highly important topic in the context of diverse Muslim-majority societies. Paper proposals are invited from prospective participants on the following four broad themes.

Possible topics are not restricted to the ones below, but proposals must establish their relevance in general to the conference theme.

Paper proposals (no more than 400 words) are due by February 25, 2018 and should be sent to: Gina Jannone, Gina.Jannone@du.edu.

Authors of accepted proposals will be notified by March 4, 2018 and final papers must be submitted by April 15, 2018.

Co-Sponsored by the Center for Middle East Studies at the Josef Korbel School of International Studies, University of Denver.