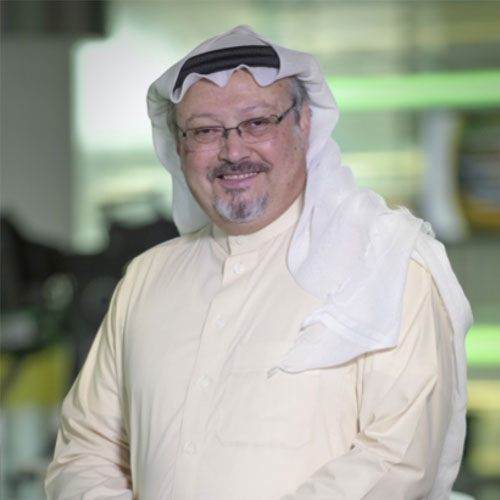 A contributor to the Washington Post’s Global Opinions, Jamal began his career as a correspondent for the English language Saudi Gazette. Between 1987-90,
he was a foreign correspondent for the pan-Arab Arabic daily Alsharq Alawsat and the Jeddah-based, English language daily Arab News. He became widely recognized
for his coverage of The Afghan War and the first Gulf War (1990-91).

From 1990 to 1999, Jamal was foreign correspondent for the other prominent pan-Arab Arabic daily, Al-Hayat. There he reported on Afghanistan, Algeria, Lebanon,
Sudan and various conflicts in the Middle East. As a result of his extensive experience, he became known as an expert in political Islam and related movements.
In 1999, Jamal was appointed Deputy Editor-in-Chief of Arab News, the leading English newspaper of Saudi Arabia. In 2003, he became Editor-in-Chief of Al-Watan, the country’s
pioneering reformist newspaper. In less than 2 month he lost his job because of his editorial policies. He was then appointed as the media advisor to Prince Turki Al-Faisal, the Saudi

Ambassador in London and later Washington. In 2007, he returned to Al-Watan as Editor-in-Chief. In 2010, again due to his editorial style, pushing boundaries of discussion and debate

within Saudi society, he was fired. In June 2010, Prince Alwaleed Bin Talal appointed Jamal to lead a new 24-hour Arabic news
channel, Al-Arab. He launched the station in Manama, Bahrain, in 2015. On the air less than 11 hours, the government ordered Al-Arab to cease broadcasting. Jamal is from Medina, Saudi Arabia and studied at the Indiana State University.
Jamal is now an independent writer based in the Washington, DC.

Title: Why the Arab World needs Democracy... Now, more than ever?

Abstract: Since Alkawakbi, we have been hoping for democracy (or some form of it) in our pursuit of “Good Governance, Equality and Justice “ in the Arab world. Now, we need it more
than ever to end the violence and to mend failed states. Autocratic Arab leaders were undone by the rise of democratic forces in the region, the "Arab Spring"; too many leaders who remain in power or took over post-2012 believe more repression (with movies, fashion shows, and other distractions) is the answer.
Yet there is hope in the other countries who are still mired in civil or internal conflicts, and those such as Tunisia that are struggling to push ahead with true democratic systems and institution (re)building. The international community must resolve to support them - with human and financial capital they need.
The battle over democracy is very real. Autocrats are retaliating against their citizens who dare express any support for the Arab Spring or individuals, such as myself, who are openly supportive of democracy in the Arab world. They label us as "Muslim brotherhood", they call us foreign agents, they jail us and then spend months determining the crimes we committed,
their social media machines troll and vilify us.
We must articulate clearly and with respect for the diversity of views within our ranks that democracy is the only way forward for the Arab world.