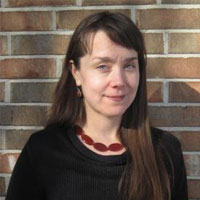 Amy Austin Holmes is an Associate Professor of Sociology at the American University in Cairo. She began teaching there in 2008, after finishing her PhD at Johns Hopkins University. She has been awarded fellowships from Harvard University, Brown University, and was a Fulbright scholar in Germany. Her research focuses on the intersection of contentious politics and security issues, broadly defined.  Her book Social Unrest and American Military Bases in Turkey and Germany since 1945 was published by Cambridge University Press; she also directed an accompanying documentary film. Having spent a decade living in the Middle East through the period known as the Arab Spring, she has published numerous articles on Egypt, Turkey, Bahrain, and the Kurdish regions of Iraq and Syria. Her articles have appeared in the Washington Post, South Atlantic Quarterly, Journal of Arabian Studies, Social Movement Studies, and the Carnegie Endowment for International Peace, to name a few. She has given TV and radio interviews with NPR, BBC, Al Jazeera, and other outlets.  She has testified in the House of Lords of the British parliament on the situation in Bahrain.

Sisi’s War on Civil Society: The Case of the Nubian Minority

The presidential elections in March made clear that President Abdel Fattah El-Sisi has even less tolerance for electoral competition than Mubarak. What is even more detrimental than sham elections is the attempt to bring civil society at large under the control of the state.  Crushing civil society has been one of Sisi’s primary objectives during his first four years as president.  This has often been discussed in the context of the draconian NGO Law.  But the regime’s agenda goes much further than tweaking a few laws or increasing its capacity for surveillance. Below the level of high politics, Sisi is attempting to fundamentally alter the nature of state-society relations in Egypt.  First and foremost, this includes an attempt to eliminate independent civil society. The NGO Law requires organizations to work “within the scope of the state’s plans.” However, even those groups that are working within the scope of the government’s own laws, such as groups that advocate for existing laws to be upheld, are also being shut down or imprisoned. For example, members of Egypt’s Nubian minority have been advocating for their rights that are guaranteed in Egypt’s 2014 Constitution. In September of last year, Nubians in Aswan staged a small and peaceful protest asking for Article 236 of the constitution to be implemented.  They were arrested and imprisoned in a facility run by Egypt’s notorious Central Security Forces, where they were not even given beds to sleep on. Gamal Sorour, the former President of the General Nubian Union in France, was one of the detainees. After two months of detention, he died in prison of medical neglect. Instead of investigating his death, the authorities have now launched a concerted defamation campaign against members of the Nubian minority.  The media campaign was timed to coincide with Sisi’s re-election, and represents an unprecedented wave of racist incitement against members of the Nubian minority. The paper will analyze these events in the context of the larger crackdown on civil society in Egypt. It will also illustrate how the Nubian minority has been a severely neglected issue in US relations with Egypt.